In 2012, the Hungarian government introduced a constitutional ban on same-sex marriage. Only a year later, Croatia held a constitutional referendum, which clarified that marriage can be available to opposite sex partners only. In February 2015, Slovakia held a similar popular vote, which, however, fell short of the required turnout.

It should be noted that there has been a clear division over the issue of same-sex couples’ rights amongst the nations of the European Union. Consequently, Western countries try to further an incentive to grant same-sex partners the right to marry, whereas the Eastern part proceeds with an agenda of limiting the constitutional right to marry to heterosexual couples only.

These clear diverging views on the same-sex marriage topic are rooted in the conservative interpretation of the European Convention on Human Rights, which is binding upon all EU Member States. Following the European Court of Human Rights’ judgement in Schalk and Kopf v. Austria[1], the Convention clearly does not require Member States’ governments to grant same-sex couples access to marriage.  Whereas some countries’ legislation reflects this old-fashioned thought, others try to find more advanced solutions tailored to the emerging acceptance for the marriage equality. 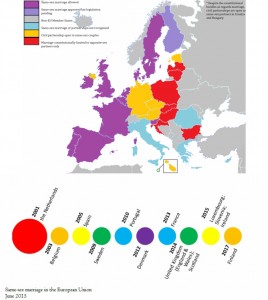 Since there is no ‘European consensus’ as regards the right to marry for same-sex couples, there is no uniform approach to tackle this ‘hot potato’. The nations of the European Union have conflicting opinions on this topic, while the Union itself does not have any competence to legislate or dictate any conditions in such fundamental matters. Although several countries have introduced civil partnerships and opened them to same-sex couples, there is only 11 countries in the European Union that have enabled same-sex couples to enter a matrimonial union to the date[2].

Against this background,  it is important to mention that an increasing number of European countries follow a more progressive thought and decide to remove existing discriminatory hurdles for same-sex couples. Most notably, on 23 May 2015, Ireland became the first country in the world to legalise same-sex marriage through a national referendum with of 62%  people casting the vote in favour.

The ‘yes’ vote comes as a surprise to some, in particular the Catholic Church, which is still quite influential on the island, although keeps off the political scene.  According to the Central Statistics Office’s data[3], Roman Catholicism is the predominant religion in Ireland with more than 80% of the population declared as active followers. Shortly after the results had been published, top Vatican’s representative commented on the vote and called upon the  for the reality check. He then compared the success of the referendum to ‘the end of humanity’ openly[4].  Such a strong and critical statement seems too radical and disproportionate as a response to the Irish nation’s will to ensure marriage equality, which was legitimately secured by the general vote in May.

Why is the legal change of marriage rights in Ireland so significant? Primarily, because the constitutional right to marry was given up to a national vote and the general public decided to extend this right to same-sex couples through direct participation in the democratic life of the country. This is a true phenomenon. In usual circumstances such a, rather controversial, constitutional amendment comes with lengthy debates and battles of political interests at the national parliaments. Ireland opted for a unique method to fight marriage discrimination. This is by far the most innovative approach, even more surprising in such a deeply religious society. The majority in the referendum voted for marriage equality. However, it is not certain that the result would have been the same, had the Parliament been in charge of the decision-making.

The outcome of the Irish referendum casts a doubt on whether or not the conservative views in other EU Member States will be able to resist this progressive change much longer. It remains to be seen if the furtherance of European integration and increasing tolerance for freedom to marry amongst countries of the Old Continent can make a real change, especially for the Eastern European countries. Some believe the Irish incentive will inspire other nations to reconsider their stance and decide whether to tackle the marriage discrimination issue. This will probably put an extra pressure on decision-makers in the following years in both Germany and Austria, which are internally divided on the issue.

Perhaps following the Irish example, a general referendum is the most appropriate manner to make an informed decision on this issue. While there is still many obstacles for the marriage equality to overcome, recent events in the European Union, e.g. Irish referendum and Estonian civil partnerships extended to same-sex couples, hopefully give the LGBTI community a sound expectation for a real change.  A bigger challenge for the EU is to convince its citizens that common fundamental values and non-discrimination safeguards do not constitute empty promises and instead they aim to protect rights of all European citizens equally. Unfortunately, no consensus on the marriage equality can be foreseen currently. Hopefully, an increasing tolerance and progressive views of the Western countries, alongside the furtherance of the European integration, will bring a change to the colours on the map and recognise or ensure better protection rights for same-sex couples within the entire European Union.

[2]    Although Finland granted the right to marry to same-sex couples, the relevant legislation enables such ceremonies to be performed starting from 2017.

View all posts by Jakub Pawlowicz →